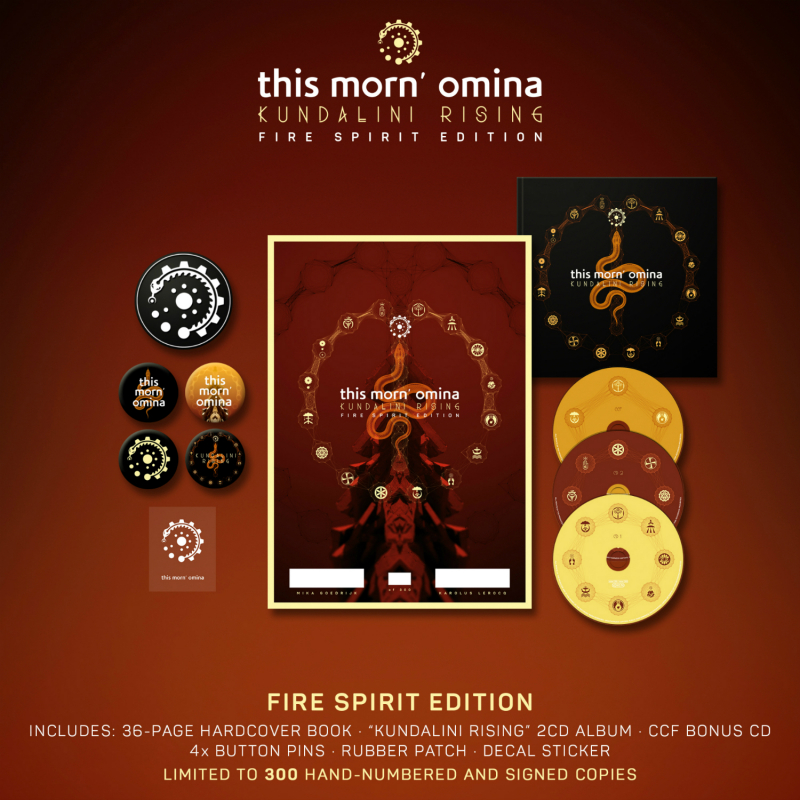 With Kundalini Rising, something significant approaches us. "Just like a hissing cobra slowly wrenching from the shadows" - this is how the duo, comprising of band founder Mika Goedrijk and Karolus Lerocq who joined the band in 2010, describes its ninth studio album.

Working on Kundalini Rising signalled the departure for new and more varied musical and spiritual realms for This Morn' Omina. Their last album L'Unification Des Forces Opposantes was released in 2011 and marked the completion of their Nyan Trilogy which was created over the course of eight years - now it was time for new myths and new visions.

In Tantric lore, the term Kundalini - meaning serpent power in Sanskrit - describes a spiritual power inherent to each human, symbolized by a coiled snake at the base of your spine which can be awakened and incited to rise by the practice of Yoga. When this process is entirely successful, the serpent unites with the cosmic soul, thus granting man the attainment of highest bliss and enlightenment.

When you're familiar with TMO's tradition of having a guiding topic for most of their releases, e.g. the subject of reincarnation on L'Unification Des Forces Opposantes, it's not far-fetched to associate Kundalini Rising with thoughts on apocalypse and its harbingers, but at the same time with possibilities of escaping or counteracting it by the activation of individual resilience or the use of reason.

The impressively designed artbook edition contains liner notes with a detailed description of the various myths on which the tracks on Kundalini Rising are based. Here you'll find a spiritual mixture of pagan customs, the legends of the Hopi, the Celts, or the teachings of Sikhism, just to name a few examples.

Continuing with this thread of duality, you will find this concept not only in the content of said myths. The most obvious facet of the musical duality that TMO aim to present with Kundalini Rising is, of course, the fact that the new record is a double CD with two very different discs.

There's a major innovation in the fact that for the first time TMO have recorded two tracks with sung vocals. The opener Ayahuasca, a driving track suitable for clubs and not entirely coincidentally named after a psychotropic plant consumed by indigenous peoples in the context of cleansing ceremonies, is TMO's initiation ritual, guiding the listener into the realm of Kundalini Rising. The first disc brings you an ecstatic sound somewhere between Tribal Industrial, Goa, and EBM. If there was an acoustic equivalent to a flickering strobe light, you'd have to issue an epilepsy trigger warning for a track like Tir Nan Og.

While disc one is ecstatic and forceful, the second one builds up an atmosphere more easily identifiable with the subject matter of the apocalypse. The great opener of disc two, God's Zoo, seems to wind its way into your years in an ominous and, yes, serpentine manner. The sound is getting ever more dragging and abysmal, but no less powerful.

Kundalini Rising will be released on March 17th, 2017, in three different editions: as a standard double CD; as a limited, 36-page artbook edition created by designer Nico J, including a bonus CD with exclusive CCF mixes; and as a "Fire Spirit Edition" limited to 300 copies, including a set of badges, an all-weather sticker, and a patch, all in a hand-numbered packaging signed by the band.